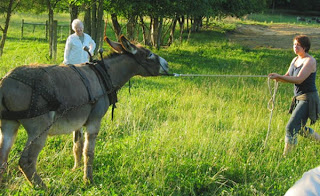 Gabbi helping Earl to get going
While we have lived on a farm for 20 years now, for about the last 9, we haven't been a "working farm"--meaning we do not generate income from our farm. So while we have 3 horses, chickens, and grow a large garden, we no longer milk a cow, raise animals for meat and grow a few acres of vegetables like we used to. So when our 16 year old daughter, Gabbi, thought she would like to visit a neighboring farm and be an "intern" for a week, we thought it was a great idea.

Paul and Robin run Hill and Hollow CSA, delivering vegetable twice a week to Nashville, TN and Glasgow, KY. They have a milk cow, raise pigs, sheep, chickens, a donkey named Earl, and a pet turkey named Manly. Plus they grow many acres of vegetables, make compost and biodynamic preparations. There is a crew of 3 interns, along with their family of 4 (which includes their daughter Madeline and their son Sasha who is a full-fledged farmer at age 11). They are your typical bright wide-eyed brilliant children who have never been to school, raised on home-grown food and no television. 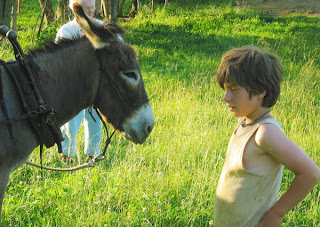 Sasha and Earl
In addition, Paul and Robin host the Nashville and Louisville Waldorf schools for their thrid grade farm visit each year, and pioneered the KY CRAFT (Collaborative Alliance for Regional Farmer Training) program, a program where the interns on organic farms from around the state meet each other, and visit and learn from other farmers.

It's very cool bit of trivia that Paul and Robin met when they were themselves interns at John Peterson's Angelic Organics (Star of The Real Dirt on Farmer John).

Gabbi was up at 5:30 am each morning to milk Addy with Sasha. After that, they spent an hour working with Earl. After a full day of farm work, the day came to a close, with Gabe again milking with Sasha and another session with Earl at dusk. (Video from John Bela)

For the last 5 years or so, Gabbi has practiced Parreli Natural Horsemanship, and received her Level 2 certificate last year. Parreli teaches how to solve train a horse and solve horse problems without force or punishment. Part of the reason Gabe wanted to head to Hill and Hollow was to have the chance to work with Earl, to begin to teach him how to pull farm equipment. He was pretty much spooking when something was behind him, kicking and hadn;t tied to pull anything. On her last day, Earl was fully hooked up in his tack, and successfully pulled the harrow around a dirt area. It was a good start. She hopes to go back in August for another week. 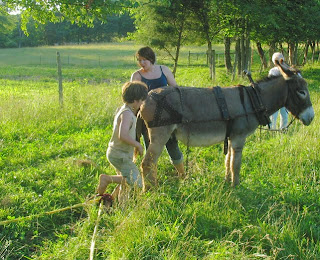 Earl about ready to pull the harrow
Paul and Robin had a send-off celebration for Gabe with a batch of homemade vanilla ice cream, and sent her home with a gallon of raw biodynamic milk and a 1/2 gallon of yogurt!
Posted by Chris and Christy Korrow at 5:04 PM 0 comments 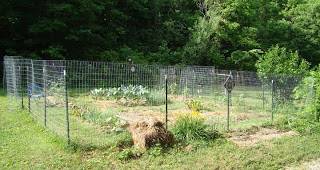 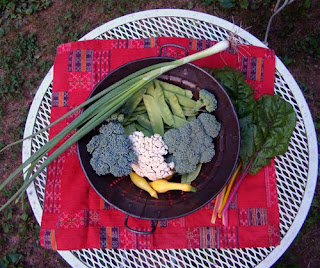 She writes “...last year this was a large area we had to mow—and this year, well, see what I picked for a stir-fry dinner last night.  And will be better when it rains as I have a lot of little seedings just coming up—more greens.”

Thank you Pat, for sending the photos.

Posted by Chris and Christy Korrow at 10:33 AM 0 comments