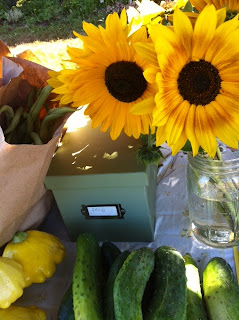 This is the fourth day of our new Front Yard Farm Stand. It has a nice ring to it. The table is filled with garlic, green beans, broccoli, cabbage, cauliflower, beets, and kale.

Two years ago when we sold our farm of twenty-plus years, and chose village life on an island in the Puget Sound, I thought we would leave farming behind. We would become the prosperous supporters of local farms, the city dwellers who turn their front yard into a garden, living a life of urban semi-self sufficiency. This felt like a relief to me, after an entire adult life committed to rather radical self sufficiency, including putting two children through cloth diapers with no washer or dryer, no indoor toilet, really living off the grid on the food grown by us and our neighbors. It was a good life. Nevertheless, our daughters grew up and Chris and I decided it was time to move to “town.” I am now a five minute walk from the best latte in the world, Yes, it’s true, many people who have traveled through Europe say they have not had a better espresso or cappuccino than that served by at Des at Useless Bay Coffee Company. But, I digress, such are the distractions of lively village life.

No sooner had we arrived, and in fact before we rented our first house in Langley, Chris had secured a plot in the local Community Garden at the Anderson Farm, turned the soil, planted seeds. My mind traveled back to the first weeks on our farm; we were living in a tent. The first work project was planting pecan trees, and the first structure built was a green house. Priorities.

And now, twenty-five years later, here we were, planing a garden before we had a home. Word spread that Chis had been a farmer, and a few people started to offer him land on which to farm. A minute later, he was on a plane, returning home to Kentucky retrieve his tractor and other farm equipment.

So, here we are again. Drying onions and garlic are strewn about the yard, our extra bedroom served as storage for a bumper crop of squash. The fridge is filled with goat milk, wine, local sausages, and cheese, all “purchased” from neighbors or local merchants in exchange for Chris’s vegetables grown just up the road a piece, at his market garden on the Anderson Farm.

We still puzzle with the real-number economics of farming—fully embracing the ideal of local food production, but also too experienced to ignore the reality that a $3 head of lettuce probably took $20 to produce. A young couple we know puts in 60 hours a week each on their CSA farm. Maybe they gross $30-40k? We wonder when the social and environmental value of local food will catch up with the economic value.

But, we keep at it. It turns out, farming followed us here.

And thus we have the new Front Yard Farm Stand. Please stop by and pick something up for dinner!