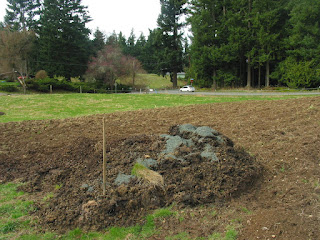 Exciting news from Chris! After relocating from Kentucky, our home for the last 20 years, we have been warmly welcomed by the wonderful community of Langley, on south Whidbey Island, Washington. We had not planned to farm commercially here on Whidbey, though we knew we would still be growing a large family garden.

After being here just a short time, Chris had three people offer him farmland where he could develop a market garden. The offer was too good to pass by! In December, we bought him a one-way ticket to Kentucky, where he rented a large Budget rental truck, loaded up our tractor, bush hog, front end loader and Italian spading machine, braved the icy mountain roads, hauling the equipment back to Whidbey.

Fast forward to the first day of spring...

A hot box is now built up against the rental house where we live, filled with seed flats-- flowers, brassicas, early tomatoes and herbs. 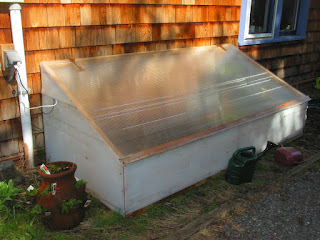 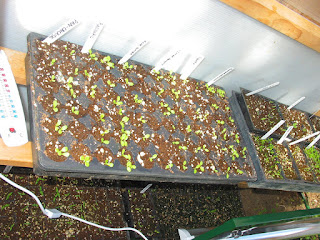 Chris will be developing a 1/3 acre market garden in the city limits of Langley, on the property of the Anderson Family Farm. Dorothy is the third generation to tend this family farm. The farm is home to the Langely Community Garden, beginning its third year. Twenty families/individuals each tend an 18 x 18 foot plot. There is also a group who manages a small herd of milk goats, another group who raises chickens and there is a heifer and a young steer being raised for beef. Compared to running our own farm, it is a welcome change, and such an honor to have the opportunity to participate in this kind of community run farm, where many hands make light work.

The ground is about turned, and I just sprayed the first barrel compost on the soil, to celebrate the first day of spring and to welcome in Persephone's return. 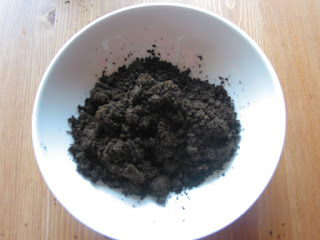 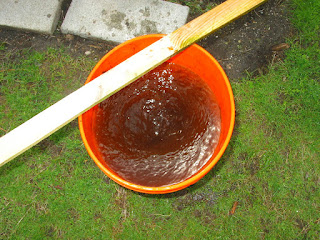 The field is a sandy loam, with predominantly rhizome grass, which will be determined to keep growing, even after it has been plowed up. Chris is going to plant cover crops this spring, and plans to get the vegetables going later in the summer. The growing season is quite long here, and though the winters are quite dark, the temperatures remain mild, making it easy to grow into an extended summer season, fall and on into winter time. Our spinach patch thrived uncovered all winter, as did our cabbages. The vegetables don't grow much during the winter, but they hold well. It seems similar to what we are used to with our winter growing in Kentucky.

The land is on the corner of two somewhat well-traveled roads. Chris is planning to keep marketing simple, and by word of mouth, people will know that he is there in the field on certain days of the week. Maybe we'll try an honor system farm stand as well.

I honestly have to say I have mixed feelings about selling food again after so many years. On one hand, I am firmly committed to local food security, I believe it is one of the most important necessary social deeds for our time. I am also keenly aware of the continuing price disparity between what we pay for food on the grocery store shelves, and what kind of price a farmer can ask for vegetables so that he or she can actually come close to making a living wage. The joy of knowing we will be producing food for the community, the excitement of experimenting in a new climate where daylight goes on until after 9pm in the summer, to grow food in the city limits of a town, and be part of such an active community farm are the thoughts I am holding onto for now.... 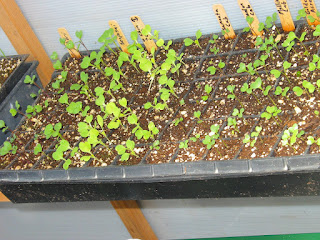 Posted by Chris and Christy Korrow at 3:24 PM 2 comments