Dancing With Thoreau at the Clyde Theater! June 22

A new film by Chis Korrow, creator of Garden Insects

Dancing with Thoreau weaves Chris's film footage and photography from dynamic natural environments across the country together with commentary from leading edge teachers, naturalists, farmers, scientists, spiritual leaders, and representatives of major religions as he explores these questions.

Climate scientists tell us we might be heading toward irreversible climate change, and so many of us do our best to “go green.” Through this film, we articulate a different kind of environmental activism, one where we are “optimized through our encounters with nature” and our lives become more compassionate, successful, balanced, and interesting as a result.

Some of the key subjects in the film are:
Perception and awareness.
The effects of nature on our mind and well being.
Laws of nature. (For example: sustainability and balance are not simply concepts, but actual laws that govern our existence.)
How color, sound, touch, and smell affect us.
Techniques to develop a deeper connection with nature.
Religious leaders who are embracing nature and its effect on our spirituality.
Gardening and agriculture as a way to reconnect with nature.
The importance of children spending time in nature.

Who appears in the film:

His Holiness The Dalai Lama
Jon Young (Author of What the Robin Knows, Coyote’s Guide to Connecting with Nature, and founder of the Wilderness Awareness School.)
David Suzuki (Author, activist and host of Canadian public television’s The Nature of Things.)
Stephan Schwartz (Senior Samueli Fellow for Brain, Mind, and Healing of the Samueli Institute, and a research associate of the Cognitive Sciences Laboratory of the Laboratories for Fundamental Research and a columnist for the journal Explore.)
April Blair & Matthew Bibeau (Founders and teachers of Mother Earth School, a Waldorf-inspired all-outdoor preschool and kindergarten in Portland, Oregon.)
Denis Hayes (National coordinator of the first Earth Day when he was 25, one of  Time magazine’s “Heroes of the Planet,” and president of the Bullitt Foundation, founders of the Bullitt Center—the world’s greenest commercial building.)
Jeffrey Cramer (Notable Thoreau scholar and author of many books, including, The Portable Thoreau, Viking/Penguin, 2012.)
Richard Ryan, PhD (Professor of psychology, psychiatry, and education, University of Rochester. Lead author of “Vitalizing effects of being outdoors and in nature,” Journal of Environmental Psychology.)
Elizabeth K. Nisbet, PhD (Psychology Department, Trent University, Ontario. Researcher on individual differences in subjective connectedness with nature--nature relatedness--and the links with health, well-being/happiness, and environmentally sustainable behavior.)
Dennis Klocek (Founder of the Coros Institute, dedicated to dialogue between individuals in the sciences, the arts, and business with a commitment to spiritual values arising from the contemplative life; director, Consciousness Studies at Rudolf Steiner College, CA; international lecturer; author of many books including, Climate, The Soul of the Earth; The Seer's Handbook; Drawing from the Book of Nature and his most recent book, Sacred Agriculture.)
The Rev. Canon Sally G. Bingham (Rev. Bingham has brought widespread attention to the link between religious faith and the environment through her work on The Regeneration Project and the Interfaith Power & Light campaign. As one of the first faith leaders to fully recognize global warming as a core moral issue, she has mobilized thousands of religious people to put their faith into action through energy stewardship. She serves as Canon for the Environment in the Episcopal Diocese of California and is the lead author of Love God Heal Earth. In 2012, Rev. Bingham was awarded the Audubon Society’s Rachel Carson Award for her environmental leadership.)

So, how does nature connection benefit us in our everyday lives?
Here is some of what the film will explore:

About the filmmaker:
Chris Korrow is a farmer, naturalist, photographer, filmmaker, and author. His film Garden Insects won three film festival awards and premiered nationwide on PBS. Frost Flowers has aired on PBS Kentucky for several years. Most recently, he has collaborated on a series of short films on food and local economy for the Whidbey Institute’s Thriving Communities effort, a series of conferences on community resiliency.

He explores the intersections between nature, agriculture, community, and spirituality through his media company, Breathe Deep Productions.
Posted by Chris and Christy Korrow at 5:39 PM 2 comments

Most weeks, I make tentative dinner menu for each night of the week. It's not an elaborate process, I just jot down four - six entrees. Most nights I cook dinner, and so it simplifies my life to plan ahead in this way. One less thing to think about! I am married to a farmer, so dinner always centers around what's coming out of the garden. If there is one thing coming on strong, then we are happy to eat ridiculous amounts that vegetable night after night. It's just what we do.

As springtime yields to summer, variety arrives. But right now, it's all about the spinach. The spinach is not only happening, the patch is--dare I say--opulent with oversized leathery leaves, which means we are devouring big bags of spinach everyday until it sends up its seed stalks. 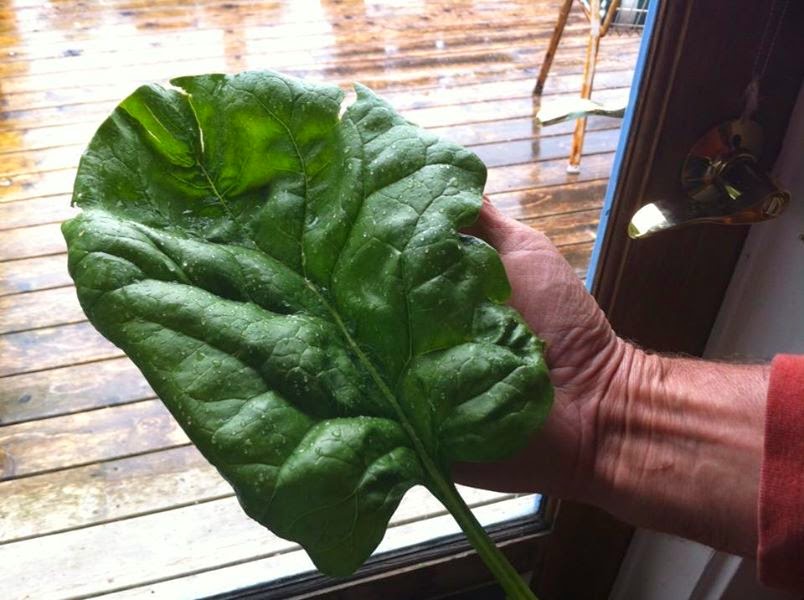 This week's list of dinner menu items looked something like:
--spinach soufflé (made this, it's a family favorite--I use the Joy of Cooking recipe but I double it),
--spinach quiche (another egg recipe, we're egg customers of neighbors Rebecca and Barb, but this got axed from thus week's menu--I've been too busy/lazy to do the crust),
--steamed spinach with orzo browned in toasted garlic and kale tops (added plenty of Parmesan to this--yum),
--spinach with lamb sausage over rice (haven't made this yet, but we buy artisan LinkLab sausage, made in Seattle, from 2nd Street Wine Shop),
--Rockwell beans with spinach (Chris froze more quarts of this local heirloom as shelly beans than I could count), and last but not least,
--ramen soup with, yes, you guessed it, lots of spinach.

But this evening, I am tired! I'm training for a half marathon so started my Sunday with a six-mile run. I headed up to our property and spent about four hours with our land partners staking out the lot sites in what will become Upper Langley Affordable Housing Community. Chris has been working like crazy getting the gardens going and finishing his movie, Dancing with Thoreau, while also overseeing the heavy equipment operators working on our housing project.

So tonight, we bought a frozen cheese pizza from The Goose, our community grocer, which we will lovingly adulterate with sliced black olives and the spinach Chris brought in, still dripping wet with rainfall.
Posted by Chris and Christy Korrow at 5:33 PM 0 comments

Join Us! Our community is forming! 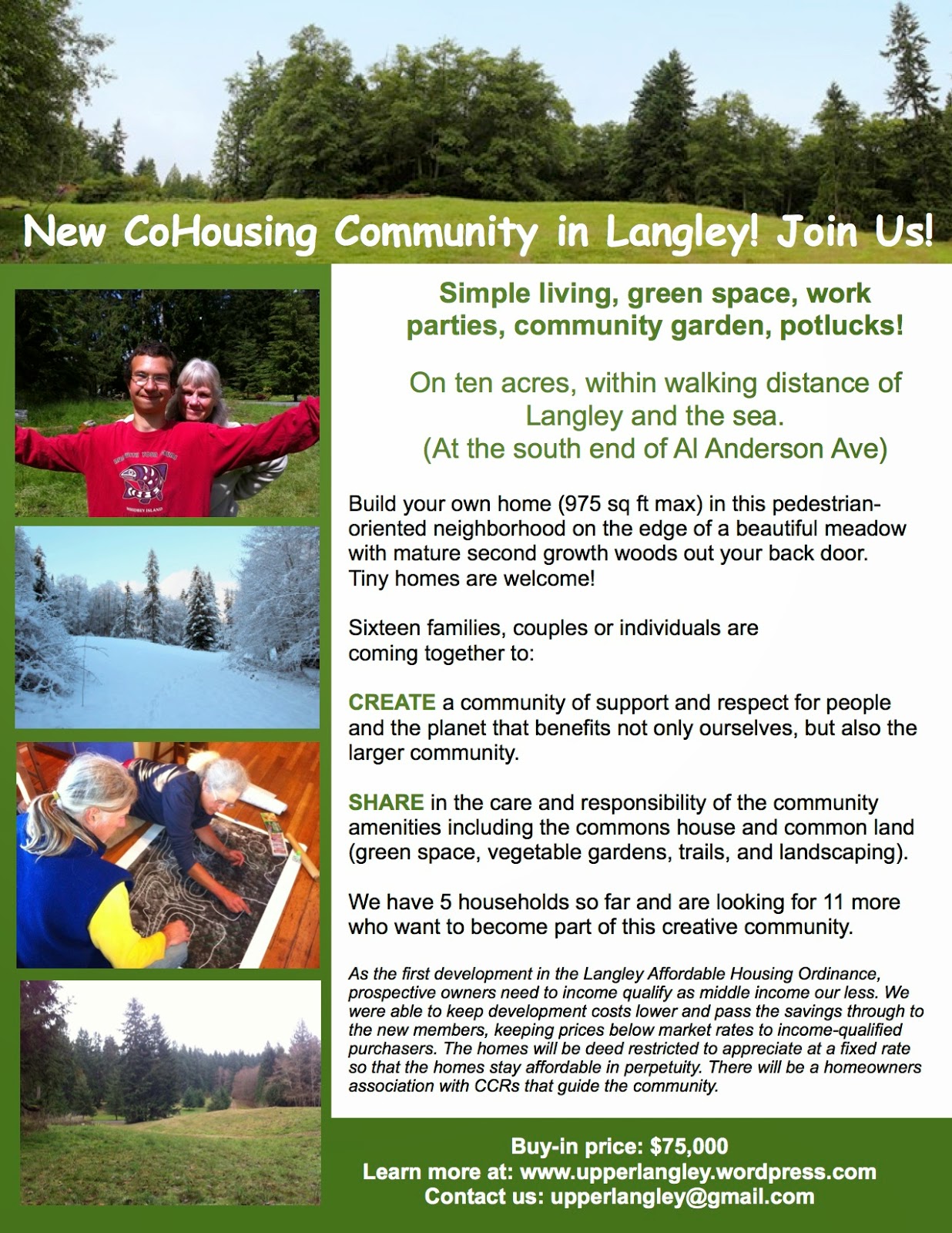 Posted by Chris and Christy Korrow at 4:22 PM 0 comments