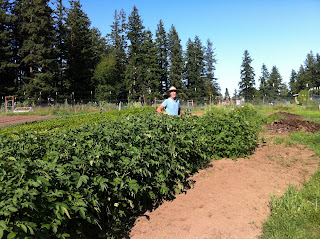 Chris is charged up about his market garden. He is on track to have crops for sale beginning in early October, and hopes to supply customers through the winter. His plan is to create a membership garden—somewhere between a farm stand and a CSA.

He likes the idea of people becoming members at a $50 fee. It gives him the security of knowing he has a dedicated customer base. It will also give the customers more flexibility than a CSA—more choice of variety, how much they want to spend, and flexibility time-wise. He hopes he can orient people to the garden to the point where they can even go in and harvest on their own, and write down what they take in a note book, using an honor-based credit system.

He has a few members already and the space is limited, so email him if you’re interested! 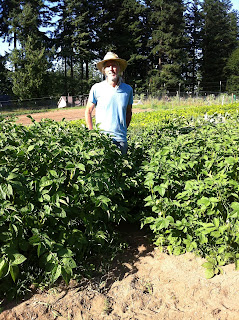 He can’t believe how well the vegetables are doing. The potato plants are the biggest he’s ever grown—waist-high. He planted a local variety that our friend has been growing on the Chinook land for many years. Squash and eggplants are also bigger than we've ever seen. Healthy, too! 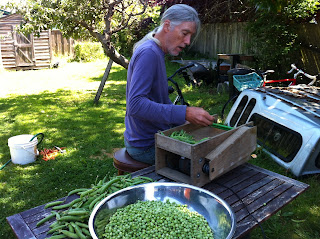 The peas are harvested, shelled and in the freezer!

Chris feels that the plot is performing so well in large part due to the amount of biodynamic preparations he has used—particularly the Pfeiffer Compost Starter and its effects on the horse manure he used. We have also done two sprayings of horn manure, one barrel compost, and we used compost preparations in the pile. Chris also did some spraying of fermented horse tail tea that we made last fall, as a preventative for mold. 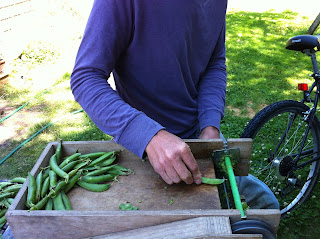 I am behind on spraying silica, but am committed to doing at least two in August and early September. I just purchased a unit of BD #501 gold, this is horn silica with potentized gold mixed in! I also have my own homemade silica prep, made from the crystals on our farm back in Kentucky. 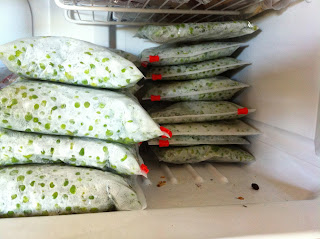 Our horns are still buried in the garden. I need to check those in the next day or so. Normally one would dig them up in early June, but with the cool Northwest spring, they were still green inside. I wrote to Hugh Courtney, my friend and colleague from the Josephine Porter Institute and asked his thoughts on leaving the horns in the ground. He replied, “Remember that Steiner says of the BD #500 (horn manure) that they can be left in the ground until you are ready to use them. (Not so for BD #501 (horn silica), because leaving them in over the winter totally changes the forces picture in a Sensitive Crystallization test as Harvey Lisle demonstrated to both of us once upon a time.) So summer forces do not affect BD #500, and the daily in breath of the Earth is akin to the winter forces needed to transform BD #500.” 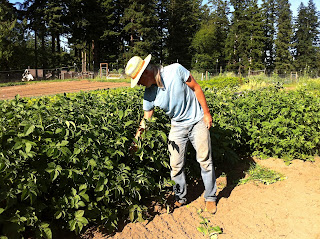 Chris is planning to do a class soon. Email him if you want to be notified when one is scheduled!
Posted by Chris and Christy Korrow at 6:38 PM 0 comments 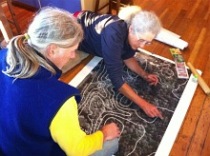 Our site plan is well underway and heading toward finalization.

Learn more about this project to create a green, affordable co-housing neighborhood in Langley, Washington that will be accessible to low-income residents.
Posted by Chris and Christy Korrow at 11:31 AM 1 comments 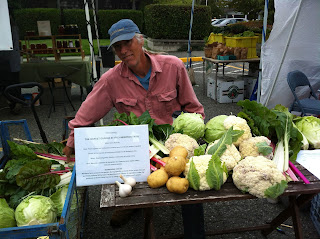 Chris planted quite a few trials this summer, testing varieties in preparation for a commercial scale market garden that will serve neighborhood customers beginning in early October, continuing through the winter.

He had enough excess cauliflower and cabbage to set up a table yesterday at the Second Street Market in downtown Langley.

It was a great chance for Chris to begin to share the news of the new Market Garden at the Anderson Farm, located at the corner of Al Anderson Ave and Fairgrounds Road. 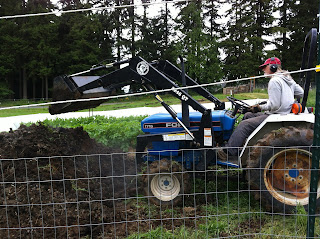 His plan is to create a membership-based garden, somewhere in between retail sales and a CSA. He is looking for a committed group of about 25 customers who will join the garden for a one-time fee, this will entitle members to purchase produce during regular weekly hours, or they can come and harvest on an honor-based system, once oriented to the garden. 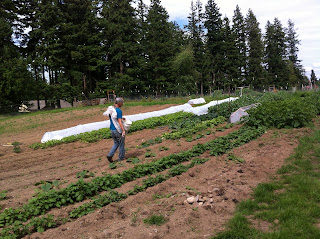 Only organic and biodynamic agricultural practices are used.

If you would like more information, please call 221-0430 or email Chris at 90acres@whidbey.com.

Posted by Chris and Christy Korrow at 8:49 PM 0 comments